The Sweet Joy of Hunting Someone Down 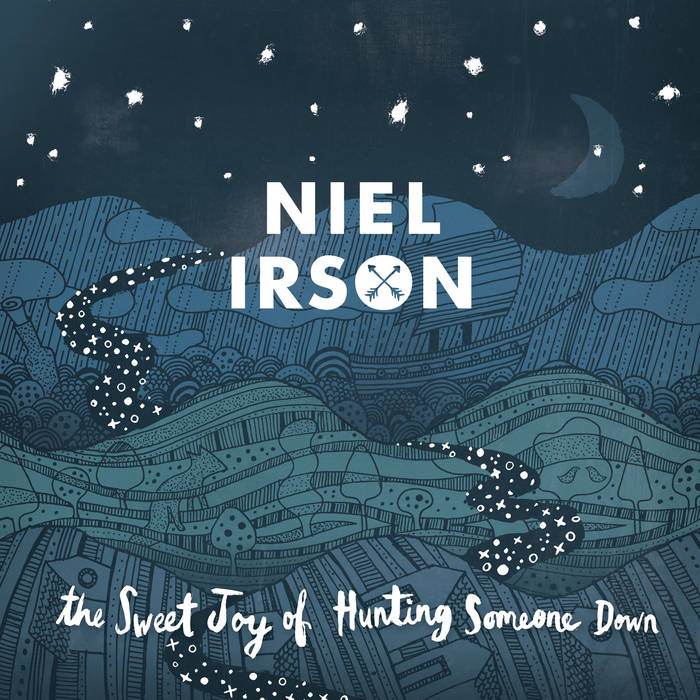 About the Journey
Most of us are familiar with the feeling. On the surface everything seems fine and dandy, but below the facade something is wrong. Terribly wrong. This was the exact situation Niel Irson was in when he left his native Denmark behind and headed to Portugal in 2011. Not only was his long-term romantic relationship slowly coming apart, but there was something about his life situation that just wasn’t right. He had a sweet, beautiful girlfriend, an admirable job as a self-made game designer, and seemed on the path to the good life. But at some point he’d lost track of himself. So, off to Portugal he went to start over on a new, inspired chapter of his life.

On the brink of the Atlantic in tiny, charming, bankruptcy-threatened Portugal, songs suddenly started to pour from him. He settled his accounts, quit the all-consuming dream job and started from scratch. Withdrew his pension funds and spent them on studio equipment, which he snuck past airport security as hand luggage weighing in at around 25 kgs. And in May 2011 he started recording what would one day become “The Sweet Joy of Hunting Someone Down” - a dusty, DIY indie-folk travelogue album from the borderlands of love.

About the Album
From the sunny southern coast of Portugal to the cold Danish shores Niel Irson has recorded a travelogue of sound. A dogma-style album with guitar and song always recorded in one take. And while some songs grew into more complex pieces, they have all been written and recorded on the dusty roads and in small spaces around Europe. The best ones have been condensed into the intensely personal album “The Sweet Joy of Hunting Someone Down” - a strong debut which demonstrates not only his ability to write an array of intriguing, modern songs, but also his talent for infectious melodies and personal, poetic lyrics that are sung from the heart.

On “The Sweet Joy of Hunting Someone Down” Niel Irson combines folk, indie pop and folk punk and defines his own artistic space in between the Ryan Adams’ songwriting, the vulnerability of Damien Rice’s “O” and a tinge of something that smells like Soundgarden grunge. It’s an intensely profound album that invites you to travel along from the puffy, pink clouds of a love in its infancy to the deep vale of despair of said love lost, and all the way to the brink of insanity.

About Niel Irson
More than anything, Niel is a songwriter. Oh, and he’s got a voice. A special kind of voice. He goes it solo as a travelling troubadour, adventurer and romantic. With his feet on the ground, his head in the clouds and his hands holding onto his lonesome companion; an acoustic guitar.

A big, huge thank you to all the talented people who've been involved in the making of this album: Jesper, for being such a talented guy and as much of a making music-soul mate as I'll ever have; Mette Rankin for Harold, investing a tiny piece of her soul and her immense graphical talent; My family, Sofie, Anine, Finn and Lisbet, for lending their ears, time and undying support.

Also a big, loving thank you to everyone who've made me believe that I can make this dream come true: Tinzinha, Jenn and Eva; Lília and Claudio; Joe and the Faro gang; Elsa; João Ramos; Barb; "Uncle" Christian; Der Brandt; Jason; Harold; Julie (of the) Wind; Julo; Jols; Stender; Sue and Jim; Jen, Mal and Miki; Liv; Biljana; Asta Banja; Mantas; Aggerbæk; Petina; Karen S & the CSSA Crew; Everyone who has supported me at my dozens of live gigs; All the people I hopefully haven't forgotten; And perhaps most of all Mari Caine who showed me back onto my one, true path: That of music and touching souls. This record is for you.

Track Name: Joleen
Just sitting here waiting for tomorrow
As the cool breeze is blowing in
And I'm gonna stay put and wait for the morning
Whether it's gonna come or not

I tried to wrap my heart in a plastic bag
Box it and hide it deep inside the fridge
Still you managed to reach in
And lure me out, somehow

Joleen
Come, please come
Track Name: Heart of Molten Gold
The flames lie scattered across the yard
And he sighs
Just one more drunken firefight
Slashing at flames that duck and hide
But oh
He has a heart of molten gold

Cos I know that you burned these holes in my eyelids
I know that you put these scars on my wrists
I'm sure that if I ever meet you again, dear
It's gonna be over
way too quick

Cos I know that you burned these holes in my eyelids
I know that you put these scars on my wrists
I'm sure that if I ever meet you again, dear
It's gonna be over
way too quick

Oh oh oh
Where are you?
Oh oh oh
Come get your present dear...

Oh and, I took you out
The very next night
Yeah, I got to take you out
Whoo!
And we drank and we drowned
But tenderly so
And then you
Took
Me
Home

But somehow every time I see you
I can't believe you, the things you say
Oh, I don't want you anywhere near me
Just scram, and let's not try this again
Some other day

Oh, every time you call me back
And every time I scratch yours
In every way we always seem to come
Together

Give me one last slice of your cake, honey cub
Right here on my forehead
Litter me good
Give me something to do
Recycling your misfortunes
Oh, my dream is black
And black's within my tongue
I give you a taste and
you hand me one back

Give me one last taste of your knuckles
Right here on my forehead
Do me one last favour before I go
And give it all you've got
Track Name: Tonight
I think I'm going out
Taking myself for a spin
Trying on your sunshine but I'm not
Letting it in

Cos we are
Nothing but bone
Nothing but skin
Just a sample of two-shine
Look, it's simple:
Knock. And I may,
Or may not let you in

Tonight
Track Name: Tesco
I meant to tell you this long ago
I never meant to cause a fuzz, turn it into a show
But when I met you down the aisle at Tesco
I just didn't have it in me, to hold i back
Amidst these miles and miles of aisles

I accidentally bit my lip as we were stading over a massive pile of fizz
And you cupped my chin with your stocky little hand, the one you so loathe
Somehow I'd forgotten just how much you fire me up
T'was as if someone had plugged me with a mega-giga watt and cranked it all the way up
And little lights were dancing, uh-oh
Yeah, little lights were dancing uh-oh
Right before my very eyes
Amidst these miles and miles of aisles
But you served me but one taste of you

I didn't notice whether they carried passion fruit that day
Or whether it was simply me, being me
But I miss your long hairs clogging up my drain
And I've tried so hard to forget, to fall in love, but it just doesn't feel the same
So I spilled my guts over line number three
Amidst these miles and miles of aisles
My woman of heart of mind
Oh, for miles and miles and miles and miles and miles
Let me take you down this
Tesco aisle
Track Name: Play Like Kites
I always thought that you would be the one to pass me by
I always figured there was no reason to even try
But here we are
Here we are

I was wondering about the brown in the blue of you eyes
I was wondering what might be lurking in there
About the plains, the sea
And here I am
Here I am